How To Buy a Project Motorcycle for Restoration or Customization

Posted by: YouMotorcycle in Motorcycle How To's & Walkthroughs February 13, 2020 2 Comments

In this series, I’ll be taking excerpts from my 30+ best motorcycle restoration project tips, and breaking them down by category. Getting the right motorcycle for your first project won’t make your project easy as pie, but buying the wrong motorcycle can definitely make your project a lot harder than it has to be. So check out this video to see my advice.

We’ll go over four of the most commonly asked questions including:

What should I do if the motorcycle I want to buy doesn’t come with an ownership?

So you’ve found the a motorcycle for your first ever project, and you’re getting it for a steal of a deal. The only problem is, the seller doesn’t have the ownership, now what? Some of you might be inclined to run far away, and that makes sense. How can you tell if a motorcycle is stolen? Can you get in trouble for buying a motorcycle with no ownership? These are serious questions that are worth taking a second to think about. Other websites recommend avoiding buying motorcycles without ownerships, but personally, I encourage it!

When it comes to how to buy a project motorcycle, the sites that advise never buying a motorcycle without an ownership are being short-sighted. They’ll tell you that you could end being charged with receipt of stolen property, a federal crime that could cost you fines, restitution to the rightful owner, and even jail time. In Canada that jail time could be up to ten years for buying the motorcycle. It could be up to fourteen years if you sell it.

The truth however, is that some of the best deals on motorcycles out there are on motorcycles where the sellers do not have ownerships. The reality is that most of these motorcycles aren’t stolen, they’ve just been forgotten about for decades and are in need of someone like you to give them some TLC.

How much should I pay for a used motorcycle that needs restoration?

How much you should pay when you buy a project motorcycle is going to depend on a lot of factors including what kind of motorcycle it is, whether or not it runs, and what kind of condition it’s in. But when it comes to buying a motorcycle for restoration, there are two general rules to keep in mind:

Rule #1: People are typically willing to sell for less than asking price.

Put yourself in the seller’s shoes: he or she listed something for sale for $1,000, after having it sit in a garage for a decade. At this point, psychologically, any money invested in the bike is a sunk cost. They’ve lost that money. Anything that can get out of it is free money that they didn’t have. If you offer $850, when they’re asking for $1,000, that’s $800 more that they haven’t had while their motorcycle has been collecting dust. They might just take it.

If they’ve had a motorcycle sitting for a long time that they’ve been planning to restore but never got around to it, there’s probably also a reason, an incentive, why they’re choosing to sell it now. Maybe they need the space for a new car, or they’re getting ready to sell the house, maybe a hostile spouse is threatening divorce if they don’t clean the place up. Whatever the reason, your seller has an incentive to be selling an old motorcycle. Your job is to figure out what that is and leverage it to get the best deal you can. Faced with any of these situations, if you were offered $150 but it got the motorcycle out of the way, wouldn’t you take the deal? When you first bring it home, start making lists and plans. All pics from here on courtesy of Motorcycles and Art.

You shouldn’t feel bad about saving a couple hundred bucks when you buy a project motorcycle because the reality is that most restoration projects have a ton of issues that sellers either don’t disclose, or don’t know about. In my early twenties I bought a 1979 Honda CB650, the first motorcycle I tried my hand at restoring. The seller either didn’t tell me, or didn’t know, that it was only running on three out of four cylinders. No compression in cylinder three. The cost of having that fixed was going to be about half of what I paid for the entire motorcycle, assuming no permanent damage was done. I sold the motorcycle.

You should only pay asking price, if, inside your heart, you’ve very excited to pay asking price. Even then, if the deal sounds too good to be true, it might be. Proceed with caution, but don’t be too slow to move or someone else (like me) will buy it first. Festina lente, that means make haste, slowly.

Should I buy a motorcycle that won’t start?

In my own story with my 1979 Honda CB650 in my early twenties, I realized that the cost of engine work was going to blow the total cost of my project out of proportion. Instead of continuing with that bike I turned around and sold it. Paying a mechanic to take apart, diagnose, and potentially rebuild a motorcycle engine can be very expensive. And I was only dealing with a motorcycle that (mostly) ran. Imagine all of the things that could be wrong with a motorcycle that doesn’t run!

If, like me, you don’t feel comfortable taking apart your motorcycle engine and putting it back together, don’t buy a motorcycle that won’t start. Stick with something that already runs, because even a runner can still have enough problems.

But some of you might have the know-how, space, and capacity to rebuild a motorcycle engine yourself. If that’s the case, all you need to worry about is opening up your engine and finding some parts permanently damaged inside. Then you’ll have the fun struggle of finding parts for a motorcycle engine that hasn’t been produced in decades, or else the cost of having to buy a whole new engine to swap in.

When we’re talking about the how to buy a project motorcycle, deciding whether or not it is running it’s up to you to decide.

What motorcycle should I buy for my first project?

For your first motorcycle restoration or customization I recommend you go Japanese. There are two main reasons why going Japanese for your first build is preferable over going American or European, and they are:

There’s something stunning about a classic BMW’s boxer twin engine. An old Triumph or Norton brings takes us back to an era where Mods and Rockers battled and British bikes ruled the roads. A vintage Moto Guzzi is a rare and exotic delight. And I don’t care what anyone says, there’s something cool about a 70 year old Harley-Davidson. It takes you back to the roots of Americana. But the thing about these motorcycles are that the demand for them is high, and their supply is low, and that makes them expensive.

Want to know how to buy a project motorcycle the right way? Save some money from the get-go! You can satisfy your itch for a goofy sideways twin for a lot less money buying a Honda CX-500 and making something like this with it. 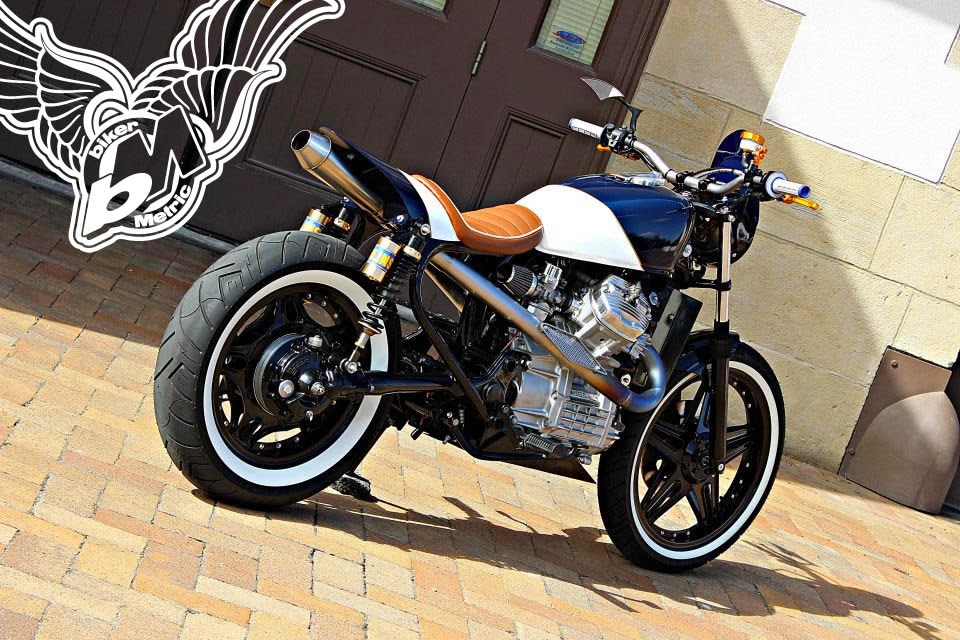 Restoring a motorcycle isn’t a weekend project. It’s going to take a lot of time. And the more parts you need, the harder they are to find, and the longer you have to wait to get them, the longer it’s going to take. Old European are great, but there wasn’t a lot of them that arrived on North American shores. That makes parts scarce and means having to order from Europe on websites you might have to translate. American motorcycles are great but there’s a lot of demand for them. That means that parts might be more plentiful, but they’re also in high demand. That drives up the cost.

Going with one of the Japanese “Big Four” (Honda, Kawasaki, Suzuki, Yamaha) will save you a lot of time and money on parts on whatever project motorcycle you buy. My only final tip is to make sure that the motorcycle you buy had a production run of several years. The Japanese were doing a lot of tests in the North American market. Some motorcycles were only produced for two years, so finding replacement parts might be tricky. Find a motorcycle that had some longevity and you’ll be able to find used parts for years to come.

Have a question? Leave it in the comments section and I’ll answer. Don’t forget to check out the rest of my 30+ best motorcycle restoration project tips!

Previous: How To Get The Ownership of a Motorcycle With No Ownership
Next: How To Test a Car Battery